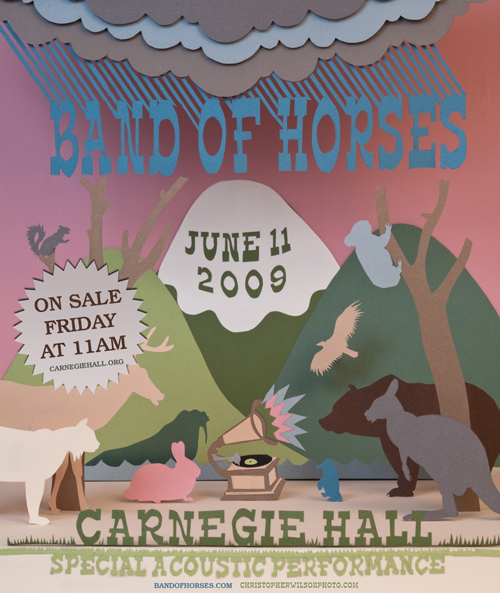 “This is just like the place we played in last night.”- Ben Bridwell, Band of Horses Lead Singer, joking about Carnegie Hall

I used to review live shows for XXL Magazine (you know, the hip hop publication), and I would always start my article with a quote from one of the acts.  Well the one above is most fitting to describe last night’s performance.  It was special, for the band and the audience, because it is certainly not a normal place to see your favorite indie rock group.  Band of Horses is a small town southern band, so I doubt they’re used to venues that give you the feeling that Abe Lincoln is sitting in the front left row of the dress circle.  I’d assume they feel at home on a bar stage, or at least some place where the ceiling isn’t a football field high and the seats made of red velvet.  I picture them jamming on the side of a an old gas station looking out at a country road.  Still, Carnegie Hall was quite a place to see them play.

First off, the sound in there is absolutely amazing.  I mean, it’s so crisp, it’s like you’re listening to a studio recording by yourself with the best headphones on the market.  The house was definitely packed with a lotta white people, mostly young, but not Miley Cyrus young, more like 20 and 30 somethings out after work or fresh off finals.  Our seats were in an ill spot: front row of the very top balcony, which was pretty high up but gave us a clear overhead view of their acoustic set up (below).  And Bridwell reached for a variety of other unseen instruments through the show (he even grabbed a melodica at one point even which was pretty cool).

They played lots of tunes from both Everything all the Time and Cease to Begin, and kept true fans on their toes by playing some of their slower songs more upbeat and vice versa, slowing down their heavier stuff.  I anticipated one of them, “Wicked Gil”, because I have a great live recording I found on the net somewhere last year of them playing it nice and slow, though the original version from the album is way more uptempo and rocky (is that a word?!)  Check it out and download it too…

The thing I love about BOH is their vocals.  Bridwell, the lead singer, has the most amazing voice, and the greatest melody lines.  And the harmony!!!! WOW!!!!  Especially in a venue like that, but man, it was so beautiful.  They played lots of country style ballads, and nailed the faster tunes too, keeping the flow of the show moving without losing the nicely seated crowd.  It’s pretty stiff and tight in there, but people still managed to yell stuff out between songs to soften the mood.  In fact, I strategically yelled out “play ‘Detlef Schrempf’!” during their encore, and my heckle was answered as they immediately dropped into the tune.  I would’ve been pissed if they didn’t play that (it’s my favorite song of theirs) so I’m glad they heard me, though I think it was that we were just on the same page.  Me and BOH have that type of connection, you know?!?! Ha.

All in all, two thumbs up.  Simply a great band with beautiful songs.  They played a few new songs off their upcoming album that were VERY NIIIIIICEEEEE, and the piano player and one of the guitar players both showcased original tunes too, grabbing on to lead vocals respectively at different points in the set.  But Bridwell is their bread and butter.  That guy is really talented.  One of the best vocalists and songwriters of my generation.  Can’t wait to hear the new album, and I hope to catch them next time around in a smaller venue, plugged in, just to see how they rock out.  Click the link below to peep the set list from last night, and read a little more about the show…

Special shout out to my dudes Jiggs and Timmy for rolling last night, we had a blast.  And big ups to Al Jiggy, my dog from UMD who was coincidentally sitting only four rows back from us in the same section.  Crazy!  Great to see you!

I’ve been checking youtube for video clips from the show.  They were being really strict about people taking pics or filming in there (the guy next to me got knocked early on so I didn’t even attempt), but it looks like a bunch of fans were able to get some fairly decent footage after all…check the link…